As this post was only in Ludum Dare blog, here is a brief post mortem about how was the LD44 for us, our creative process through last weekend and what changes we’ve made mid-project. It’s probably not eeeverything we wanted to share, but it’s a good barebone if it all.

We were working at my place. We really believe that working in the same room does really well for the work pipeline, as it does become faster and our “deadlines” felt much more accurate.

At the start, our brainstorm brought some general themes, like:

We’ve set a couple of hours as a limit to come with a decision and the conclusion is literally what you can see in the game. As we noticed since before LD time, we were short of design-power, as I’m most of a programmer and RodNasca an artist, so we agreed on doing “time gates” to align expectations, decisions, and design choices, and we’d continue doing our individual work between these hours.

At first iteration, the game was simple and very close to the final one: The AI controlling the ship’s energy and choosing the best usage for it, as humans travel to their new planet. And the gameplay was pretty much about it, energy usage by choices and minimum turns to get to the good ending. The energy drop didn’t have anything to do with the time and there weren’t any optional endings. Just one goal. After this step, we’ve adopted Google Spreadsheets as the main tool to organize the dialogs and choices, and from that, we’ve exported it as .csv with the cells separator as tabs. It was then imported to the Unity project and deserialized to populate our Dialogs and Choices models.

This table is definitely much larger than this, lol

The first time gate discussion between us was nearly only about it and how it was an empty premise and felt stale and “numb”. It was like the player didn’t have much weight on his decisions. So we decided to make it change the fate of the ship’s crew, even if he only realized that at the end of each run. So this was the birth of the “Hope” and “Chaos” hidden traits around the game run. It felt only natural that we needed other values, aside from the energy one, as the problem was pretty much we had only one value to work around the “win-lose” attribute.

As time went by, the first gameplay prototype was done and working, but we haven’t decided on any narrative and characters, just the stage and mood we wanted. So the second time gate discussion was about the narrative among the dialogs and choices. After another brainstorm, we had many pieces of paper scattered on the table, each one containing a dialog, and, after that, many pieces containing characters. It was like a jigsaw to us, getting characters and dialog together as they seem fit. After it was done, we’ve chosen some characters to have a more developed narrative, like the Alien and the Doctor, and created the unlockable dialogs by previous choices. 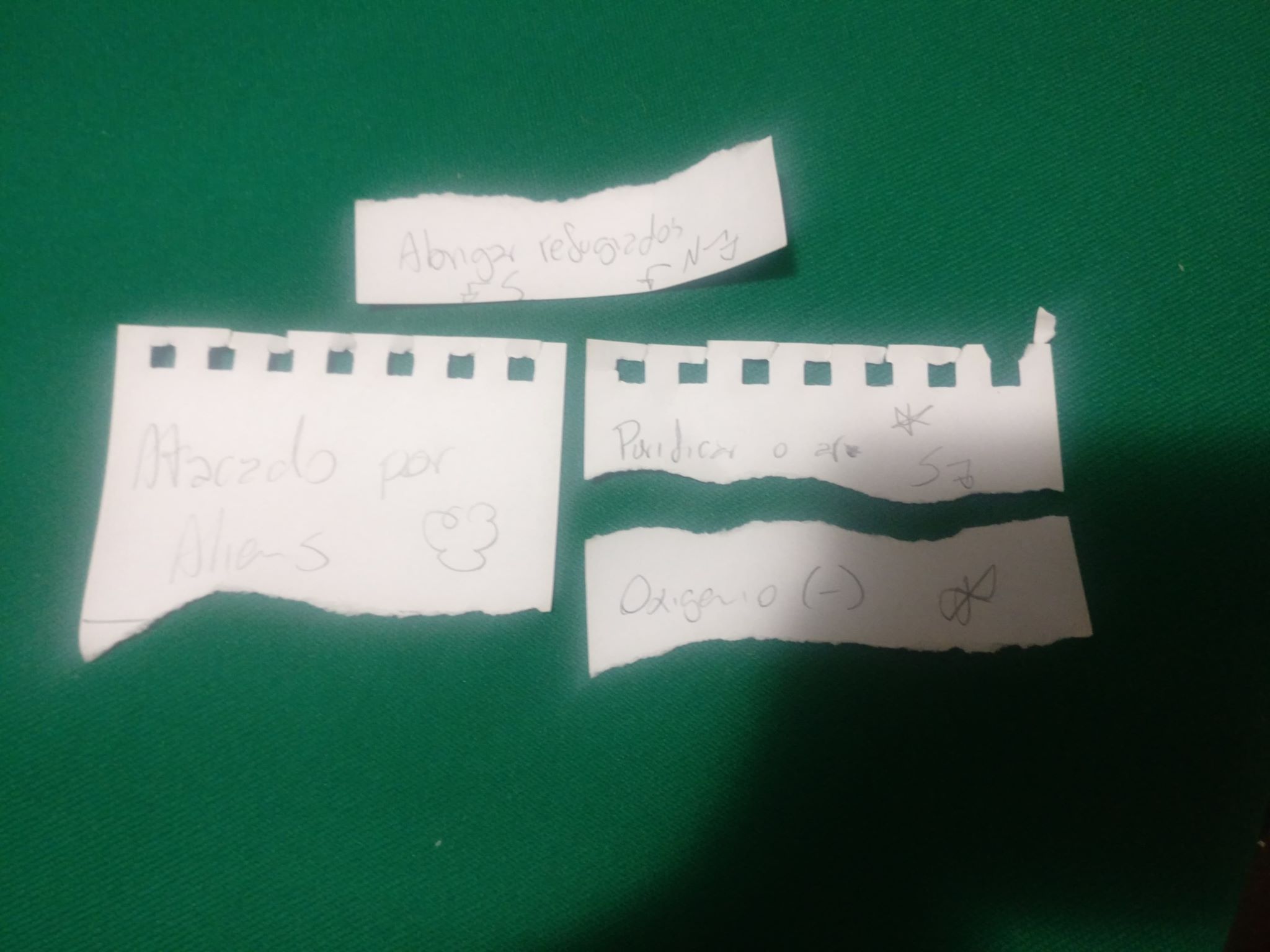 Many narratives were aligned on the table, like this one (written in Brazilian Portuguese, btw)

At this time we had less than 6 hours and many things that we’ve planned were lacking: main screen, sound control, these “quality of life” features. So as RodNasca, as he had many characters to create and animate yet. We’ve decided to create the characters in separate pieces and animate directly in Unity animator, but as the time was short RodNasca resorted to the good old sprite sheet to it, as he finds more simple and free for him to create and animate at the same time.

And so the game was published at the final minutes, with a quick description created in LD website and then replicated to itch.io, with everything uploaded 2 minutes before the LD deadline. Much closer as we expected, taking into consideration the first idea.

We’ve got very excited about the numbers at itch.io and the feedback here and there!

Even with the numerous grammar and spelling mistakes, many because the text being written in a hurry and English not being our native language, and the limited narrative we were able to do, it’s wonderful to have that many people playing the game.

Be an AI and decide an colony spaceship destiny!